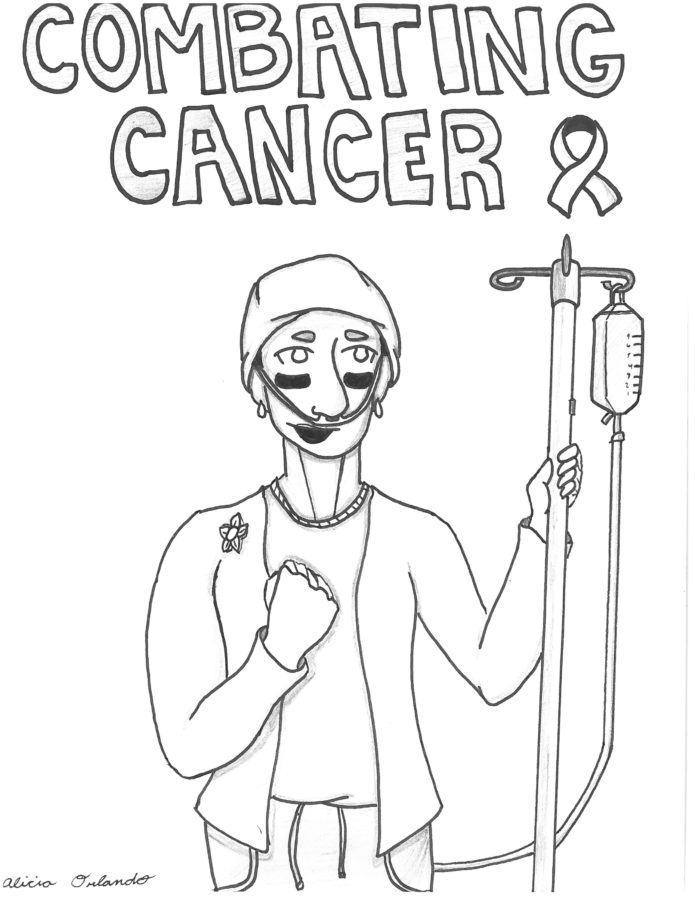 This drawing is dedicated to Misook Orlando for her tenacious battle with colon cancer. It is drawn in tribute by her daughter Alicia Orlando, senior at NHS.

Cancer is, without a doubt, one of the worst things that can happen to any person.

Those who have gone through it know the pain firsthand, whether it is physical or psychological. But what about those who are not afflicted, but still affected?

Traditionally, cancer stories focus on the survivors themselves. Though modern times have showcased cancer creating a ripple effect, not only impacting the cancer patients themselves, but also expanding to anyone and everyone connected.

With that in mind, here are some ways to cope with cancer and its symptoms for people with cancer, and how their friends and families can support them along the way to combat cancer.

Cancer may seem like a big task to overcome. But the first step comes from peace of mind; finding the proper treatment center for you or your loved ones. Three major institutions for research and treatment exist in the Midwest: Mayo Clinic, Northwestern Memorial Hospital, and the UW Carbone Cancer Center. According to U.S. News and World Report, rankings follow: #3, #14, and #43, respectively, in the nation. Additionally, each come with individual perks.

Mayo Clinic is regarded as the world’s leader in cancer research, having recently developed a technique called proton beam therapy, which targets tumors for reduction but leaves nearby tissue undamaged. Mayo continues to be on the forefront of the battle to cure cancer, and likely will for some time yet to come.

The Northwestern Memorial Hospital is regarded as one of the top comprehensive cancer centers in the country, utilizing the latest technology to treat cancer at one of the quickest rates in the nation. Also, NMU features one of the most individualized programs in the nation, as a man named Jason found out during his time at the hospital.

“It was life changing,” Jason said when asked about his time at Northwestern Memorial Hospital. “I got personalized, specific care. All the people I would talk to I met from the get-go. Everything was so dynamic in a way that made me feel like I was being cared for.”

If proximity is the goal, and a cancer patient wishes to stay in Wisconsin, then look no further than the UW Carbone Cancer Center. It is the only comprehensive cancer center in the state of Wisconsin, offering treatment and diagnosis at a lower cost than Mayo Clinic or NMU.

When a cancer case is diagnosed, the feelings and emotions that result from the diagnosis are similar to the five stages of grief. One can become angry, desperate, drained of energy, and even depressed. As awful as this sounds, this is all fairly normal. Those with cancer should take these initial days to properly grieve, and figure out what the most important things in their lives are. To help in this process, family members and friends should simply offer their full love and support.

A tip from the American Cancer Society suggests: Instead of saying, “I know how you feel,” say “I can’t possibly know how you feel, but if there is anything you need, don’t hesitate to let me know.” This reinforces a feeling of understanding and support, rather than trying to provide a false sense of empathy, something that can often be polarizing to a person with cancer.

The absolute most important thing any close friend or loved one can do after a treatment center and plan are settled on is to simply listen. Listening, truly listening to someone’s problems can make all the difference in the world. In comparison, if someone has formerly struggled with mental health issues, having someone close to listen makes a survivor feel like someone genuinely cares; thus feeling empowered, restored, and ultimately pulled out of a poor state of mind back to self.

Jaime is another cancer survivor who understands this feeling all too well.

“After diagnosis, I started breaking the news to people that I had cancer. Having a couple of people who listen and are very open with you was very nice. I found that, after five to six people, that crying and saying they needed someone to hug them was going to be the normal response. So, it was nice to have a few people I could speak to who would just listen, so that I could let them know I was scared because everyone else needed reassurance from me,” Jaime said reflecting on when she was diagnosed with cancer.

As the cancer develops, most people will gain a heightened sense of stress and anxiety. For some, this may even develop into depression. While these obstacles may seem insurmountable at first, friends, family, and proper strategy can surmount any level of stress generated. To reduce stress, a person should try to avoid scheduling conflicts, be careful to prioritize their tasks, and only concentrate on what they can control. Of course, the regular rules of sleeping, eating, and exercising still apply. Friends and family should try to schedule regular social time and activities with their loved one, as it increases their comfort level and helps them stay happy during a difficult time.

Family is especially difficult when the person with cancer is a child with siblings. A parent-child relationship is bad enough when cancer is involved, but the trauma of seeing a brother or sister suffer from this ailment is as bad as it gets. Fortunately, coping mechanisms exist for this too. Parents and future parents should make sure to set a good example for their children, allow their children to regularly communicate with and help the child with cancer, and most importantly, seek outside help if need be.

No one should try to cope with cancer on their own, and seeing a specialist may unlock new relaxation techniques and coping mechanisms that are unknown to most, giving someone out there an edge they need in the battle against cancer.