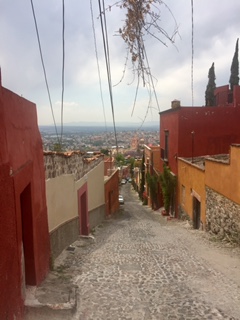 belonging or native to a particular people or country

containing or made up of fundamentally different and often incongruous elements

While on vacation there are chances to partake in crazy and disparate experiences.

the language or dialect spoken by the ordinary people in a particular country or region.

There are certain things that can be learned before trips that might come in common such as traveling vernacular.

By following these three tips, running through the airport dazed and confused will be a farce.

Unless they are part of a humanitarian organization or on a relief mission, people generally do not go on vacation to help the poor or look at bedraggled views.

Characterized by a lack of care, thought, or organization.

These attractions are accepted as the most slipshod travel destinations because they are either racist, sexist, unethical, or disrespectful.

Describe or regard as worthy or disgrace or great disapproval

People generally think of the London Dungeon as an entertaining spot for families to visit while in London, but in actuality, this attraction has been stigmatized as sexist and misogynistic.

It is a statue of Gen. Nathaniel Bedford Forrest on his horse surrounded by a multitudinal of apples.

An equally repugnant attraction is Jarawa tours, which have been under an increasing amount of inspection from the Indian government and press.

Persuade to do something by threats

Videos were published of footage with girls from a tribe being coerced into dancing semi-naked in return for food.

But just because there is one ¨good¨ tour, that does not make up for the many other tours collecting a gargantuan profit from this unfortunate situation.

Violate the prohibition or order of

Not only that but when the tourists get out of the buses, they contravene on personal property and take pictures of the residences and their homes as if they are in a zoo.

Forcibly pull from a persons grasp

Not showing a serious or respectful attitude

Ali Gharib said after the fact that he realized the comments were flippant and irresponsible.

raising a great clatter and commotion; disorderly or noisy.

This ancient ruin is an iconic correlation to the long, tumultuous history Rome has faced.

one of the seven main churches of Rome or another Roman Catholic church accorded the same religious privileges.

Another popular attraction in Rome is St. Peter’s Basilica, the current shrine in the Vatican City.

a building, especially one of large size or imposing appearance.

The edifice is the primary pilgrimage site for Christians as the city of Jerusalem is for the Jewish.

to grow together or into one body.

This statue, a gift of harmony from France, is recognized as a universal symbol of freedom and coalesce.

Both states/cities emcee a vast array of incredible attractions.

characterized by or given to pretentious or conspicuous show in an attempt to impress others.

a yawning fissure or deep cleft in the earth’s surface; gorge.

This massive chasm is unlike anything else in the world.

of his, her, its, or their own kind; unique.

Another sui generis attraction Arizona bears is Montezuma Castle, which is a well-preserved ancient dwelling.

Whether discussing the natural beauty of volcanoes or the architectural masterpieces of skyscrapers, each commodity holds pulchritude.