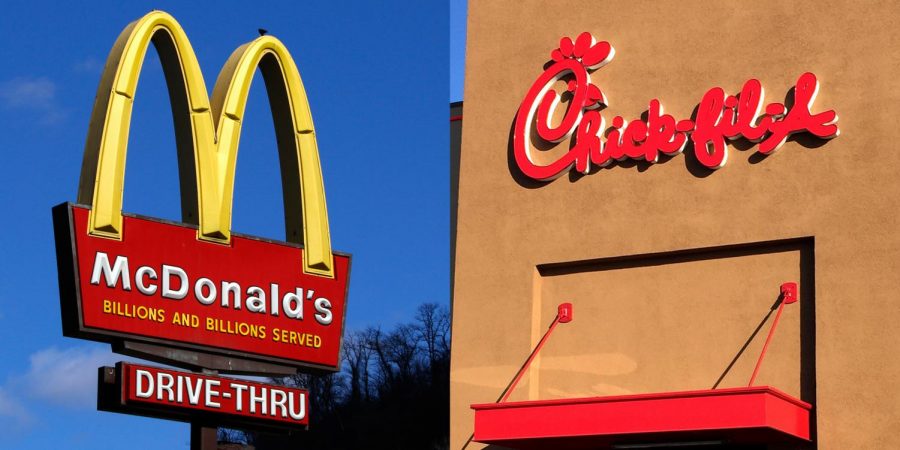 According to DoSomething, at least 1 in 4 eat some type of fast food daily. Two of the most popular places to quickly grab a meal in the United States is Chick-Fil-A and Mcdonalds. From the classic McChicken, fries, and soda from McDonald’s to the chicken sandwich, fries, and soda from Chick-Fil-A, offer clashing experiences. As Chick-Fil-A slogan reads “Eat Mor Chikin,” $3.1 million is banked annually per store. McDonald’s, America’s slogan reads “I’m Lovin’ It” and indeed people are lovin’ it with $2.7 million banked annually. Though this may be true, research has shown American’s are lovin’ Chick-Fil-A more. According to BusinessInsider, both Chick-Fil-A and McDonald’s are competing for successful fast-food chains in American with Chick-Fil-A winning in recent research. With Chick-Fil-A receiving .4 more million than McDonald’s, it’s clearly the most popular option. What is making people choose Chick-Fil-A over McDonald’s? What aspects do more like about most about their fast food?

Both Chick-Fil-A and McDonald’s have pros and cons.

Chick-Fil-A, as a fast-food chain, has a variety of benefits. First, served chicken as whole breast meat made with simple ingredients. No fillers or hormones are added. Unlike McDonald’s where the food is made with fillers, sits on a hot bar to keep the food warm, and makes the worst burgers according to EBSCOhost.com. Produced is delivered daily, salads are chopped and prepared several times a day, Along with that, their lemonade is hand-mixed daily and with pure cane sugar and water. Though this process may not be easy, it’s the only way Chick-Fil-A knows.

Second, Chick-Fil-A has a cleaner environment. Garbage is taken off your table when employees see your done and are whipped down as soon as you leave for the next customers. Also, Chick-Fil-A is now using environment-friendly garbage bags that crush trash down to save space in landfills. Compared to McDonald’s, clean tables are hit or miss. Finally, Chick-Fil-A employees are respectful and proper. When a customer says “thank you,” they always reply “my pleasure.” Employees are constantly walking around asking if anyone is in need of something like a refill or napkins. One disadvantage Huffpost.com shares is Chick-Fil-A is closed on Sundays.

Chick-Fil-A and McDonald’s are two popular and good options for fast food worldwide. Chick-Fil-A offers fresh and similar made food and have respectful employees. McDonald’s, on the other hand, offers cheap, incredibly fast pick up, and a more expansive menu. Both pros and cons being considered, it is up to the consumer to decide which is the best place to stop for fast food.