Review: The Secret in the Wings Showcases Story 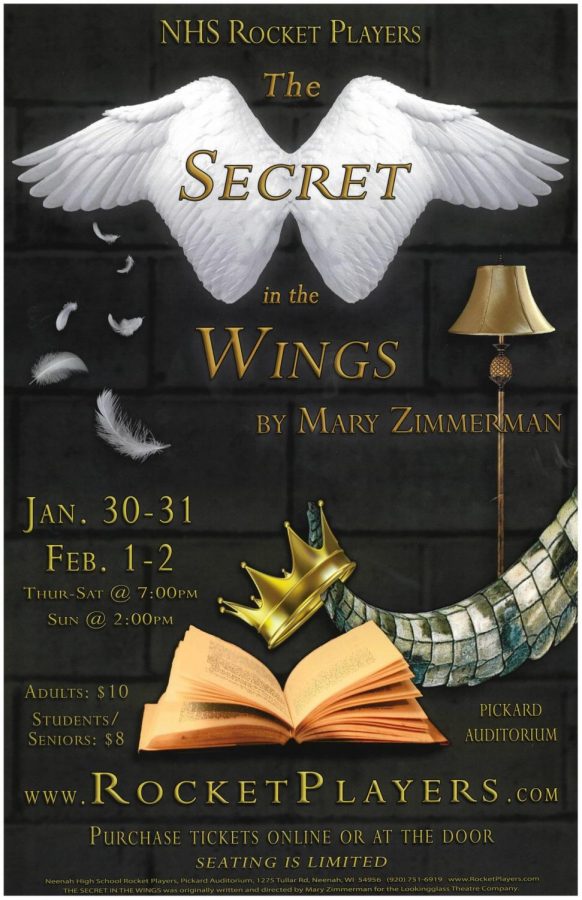 I was quite excited to go see the opening night of The Secret in the Wings.

Since the minute I walked into Pickard Auditorium, I realized that it was not like any other play I had seen so far.  As I saw that the entire auditorium was empty, I walked over to a group of staff members and asked “Am I early?”

The staff members pointed to the stage.  To my surprise, I saw that every seat was located on the stage itself, surrounding a large white space where the actors performed.  Immediately after sitting down and seeing all the bright decorations on-stage, I knew that watching it was going to be an interesting experience.

After a brief introduction, The Secret in the Wings opens to two characters — Heidi, and her “ogre” neighbor Mr. Fitzpatrick, who babysits her.  To entertain her, Mr. Fitzpatrick tells Heidi a series of six different stories that she has never heard before.

These six stories were divided up into 12 acts, with no intermission.  The publicity surrounding The Secret in the Wings confirmed that none of these stories were ever well-known or popular; however, this did not take away from my overall enjoyment of them.   Despite a noticeable lack of props and items on stage, the actors performed their parts to the best of their abilities.  It was evident that they had practiced their roles for a long time.  Every act of The Secret in the Wings used the same set of 12 actors, who quickly changed between acts to cover each part they played.

Despite the noticeably less number of actors, there were a whopping 58 crew members who handled lighting, sound, production, costumes, and various other things.  Their effort was also evident; bright stage lights followed the main characters and soothing background music helped immerse the audience more in the story.

While being fundamentally different from past productions, The Secret in the Wings was a brilliantly-executed show, using an innovative way to tell fun stories from virtually nothing.  It runs from Thursday, 30 Jan. to Saturday, 1 Feb. at 7 p.m., and on Sunday, 2 Feb. at 2 p.m.