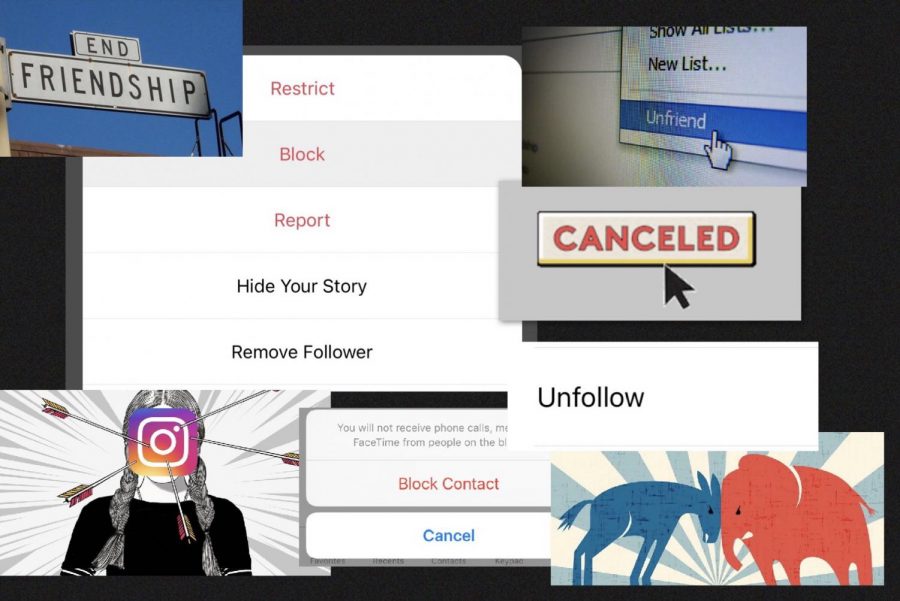 On top of the COVID-19 pandemic, anti-racism protests, and the death of an honored Supreme Court justice, this tumultuous year also included a high-stakes presidential election. Two antagonistic candidates went head-to-head, dividing the nation between Trump and Biden supporters, between Republican and Democrat. The 2020 election reaped a voter turnout at its highest in more than a century, and social media facilitated communication and the spread of information throughout the election.

The pandemic, however, impaired in-person socialization efforts for many friends and family. As such, political relations this year proved divisive among the American population. This election marked a period of politics so polarizing that close friendships ceased over disagreements.

In fact, according to the Pew Research Center, only one in five Trump or Biden supporters say they share the same central American values as those in the opposing party. This data represents the broad canyon separating the two major voting coalitions, one that signifies the glaring distinctions between Americans’ fundamental ideas.

Likewise, data gathered from Neenah High School students reflects this division. In a survey of 185 NHS students, 37.3 percent of respondents indicated they rarely relate to someone with opposing political opinions, and 8.1 percent said they never do.

High-schoolers have become more politically charged in general, Ms. Deb Gauthier, teacher of U.S history at NHS, said. “Political conversations for students… seem more polarized than ever before,” Gauthier noted. In her classroom, she encourages students to evaluate candidates based on issues that matter to them personally.

Many teenagers, even those who cannot yet vote, engaged in political activity during the election season. Results from the same survey revealed that 55 percent of students report being at least moderately active in politics.

This trend does not go unnoticed by other students. On social media, people often express hostility to peers who post about their political views, Vincent Jacque, senior, said. Jacque has seen his friends receive backlash after posting about politics on multiple occasions, including losing followers, being blocked, and receiving confrontational direct messages.

This year, politics affected sophomore Eva Landstrom more personally. One of her close cousins refused to recognize the chosen pronouns of Landstrom’s older brother, who came out as transgender in middle school. After some difficult conversation, Landstrom said, she made the decision to stop talking to the cousin. Conversations this election, she explained, revealed the political views of many of her family members, and she “can’t look at some of them the same.”

The survey results indicate that familial conflict of this sort is common for respondents, 38.6 percent of whom said their family relations have become more strained over political issues this year.

On the other hand, freshman E Moore-Nokes experiences the most conflict with those less close to her. A member of the LGBTQ+ community, Moore-Nokes posts related messages on her social media accounts to share her opinions. In the beginning, she said, she lost five to 10 followers, most of whom she knew from school but with whom she had no previous political confrontations. The hostility extends further; “once I got a message saying that I would burn in hell,” Moore-Nokes said.

Jacque observes, “in person, [opponents] seem to be a lot more civil to each other.”But he said, “when you’re behind the screen, you feel invincible.”

The atmosphere of instant animosity on social media can affect close relationships, survey results show. When friends cross the line, or when the disagreements become too much to ignore, ties sever; as such, 15.1 percent of students have cut contact with a friend over politics, and 12.7 percent have had a friend cut contact with them.

For senior Nicole Makope, disagreements over “moral issues,” as she explained, prompted her to distance herself from close friends. Makope’s views “come from the deepest part of [her] heart,” and sustaining friendships with those who disagreed would become difficult, she said.

Ending those relationships, in Makope’s case, benefited her mental health. She approaches the current political atmosphere with a positive outlook on her peer group’s behavior. “Gen Z is really conscious and aware of how our words and our actions might affect other people,” she said.

Landstrom, on the other hand, remarked that constant debate adds to stress levels. “A problem with my peers is listening. They don’t want to listen to people.”

Even in the school setting, despite pandemic-related modifications, students perceive an increased political presence during classes. Moore-Nokes, for instance, noticed campaign flags in the background of her classmates’ cameras during school Zoom calls.

Evidently, politics is “an unavoidable topic,” according to Makope. Additionally, Gauthier said, “it seems no one really wants to learn other perspectives,” about her students. So, in a polarized political culture, how do teens search for ways to maintain healthy social connections?

Makope’s practice, which she calls “loving people from a distance,” means keeping arm’s length from old friends that hold different views, but still acting kindly. She prefers an amiable, yet distanced approach. “Pick your battles,” she said, and remember that “someone must learn for themselves how to think.”

Jacque held that students, and Americans in general, should adopt a more open-minded perspective. “After all, our country was founded on the principle that everyone is entitled to their opinions,” he said.

In a year that brought everything from stay-at-home orders to hashtag activism to the spread of “cancel culture,” Neenah teens stand in much the same place as voting adults: on a polarized spectrum, where the middle terrain expands and people less frequently occupy it. Prospects of increased technology and unknown futures beg the question: how will political conversations shape the social world of tomorrow’s youth?