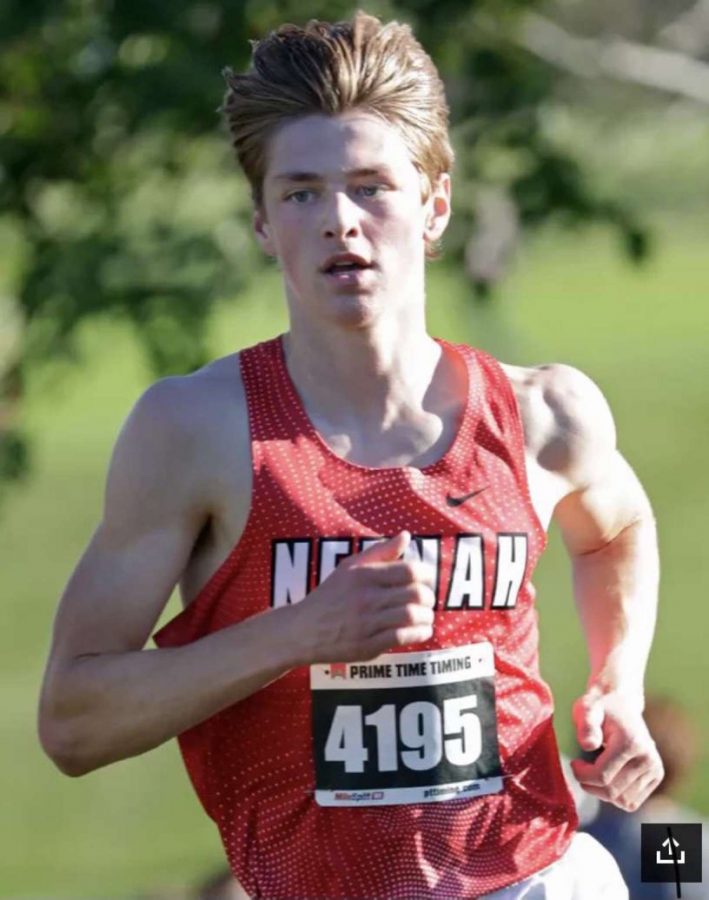 It’s the night before a Neenah Varsity Cross Country meet, and senior Austin Henderson follows his routine.  Every night before a meet, he cools his nerves and body in an ice bath. After about a half-hour, Henderson gets out of his arctic tub and gets ready for bed. The average high school student goes to bed around 11 p.m., Henderson is in bed at 9:30 p.m.. After a great night’s sleep and a hard day of school in which Henderson is a straight-A student, he is at the venue of his meet, doing his normal pre-meet routine.

“Right before the race is about to begin, I do the same warm-up and try to focus on the process of running as opposed to possible results.”

Clearly, he must be doing something right in that warm-up because Henderson is not just a basic high school cross country runner. He is one of the top runners in the country. His Tom Brady-Esque resume includes four first-team all-conference honors in the FVA, two runner-of-the-year awards, and he’s full steam ahead to the state cross country meet on Oct. 23. In terms of his statistics in running, Henderson might just be a cyborg. In a typical 5,000 meter/3.1 mile race, Henderson’s personal record is 15 minutes and 14 seconds, which is a staggering pace of 5 minutes per mile. Couple that with a personal record of a 4-minute 15-second mile, and Henderson is known to have got the hang of this running thing.

“I don’t always enjoy it. Many times I don’t feel like going out and putting in the miles, but I remind myself of the goals I have and am able to refocus and put the necessary work in to achieve them.”

The dedication has certainly paid off. Henderson has offers from a plethora of D1 schools across the country, from the likes of Purdue, UW-Madison, South Carolina, Illinois, and Ohio State. Henderson’s teammate Hayden Hollinbeck knows having a runner like Henderson in the program certainly helps in multiple ways, not only because of his ability but what his ability does to other runners on the team mentally.

“Running with someone of his caliber can push you farther than you ever thought you could go. The standard he’s set not only helps us win meets but makes us all better runners.”

Henderson definitely has a big few months coming up. He has the state cross country meet, potentially national’s, and then after that, he goes right into swim season. But a tough decision he will have to make is what college he’s choosing. Henderson will be running both track and cross country in college, and narrowing down a decision for not only the best option for both of those sports, but also for his education is incredibly tough.

“I’ve narrowed it down to a few schools and will hopefully be able to make a decision soon. I’d like to stay in the Big Ten and earn a business degree, which is something that has stood out in each of the schools I’m considering. As far as cross country and track programs go, I’m looking for a competitive program with a positive team culture.”