Mathematics Teacher Finds Motivation for Himself and Others 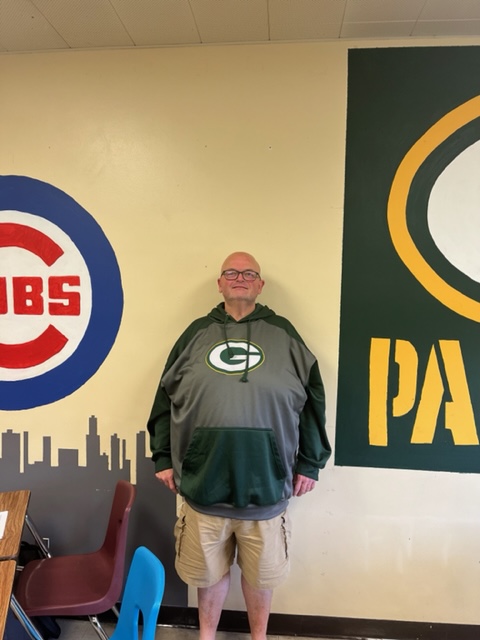 Jacobson beside one of his greatest passions.

Motivation. That is a word that so many people throw around in their everyday lives, but something few people truly have. Mr. Todd Jacobson happens to be a shining example of someone who has motivation.

He has been a teacher here at Neenah for 16 years and is known around the school by facility and students. To students, he is a smiling face in the halls and a fun person to converse with. To facility, he is a friend and a sports fanatic.

Here, Mr. Jacobson keeps the energy of this school alive. He makes sure that all students, even the ones he does not teach, are happy and that they find success in their lives.

Jacobson makes his goal crystal clear:  “If I can make a kid smile more and feel happier when they walk out of my classroom, I’m doing my job.”

How he pertains to motivation, however, is a different story.  Jacobson not only motivates others, but he has also learned motivation in himself. For the past 20 years, Jacobson has been working on losing weight to feel healthier and physically fit. Recently, he had the opportunity to undergo gastric bypass surgery to pursue this much different goal.

Jacobson explains that loads of mental preparation are required before committing to an operation as large as this. His adviser only put him through seven of the eleven meetings for mindful preparation, proving high commitment and certainty. His biggest advice for anyone who wants to make a change in their life “is to be ready.” Jacobson states that statement is what got him through his weight loss journey.

Jacobson claims that despite his divorce five years ago, his family and close colleagues have kept him going through his entire weight loss journey. One of his best friends is a fellow mathematics teacher at the high school, Mr. Ryan Walter, whom he shares an office with and spends time with outside the doors of NHS.

For the past three years, he has been on a new adventure, risking his life on the road to teach students the skill of operating and safely driving a motor vehicle. Though he is paid well, he did not spend a dime of it on his surgery.

The strong-willed teacher saved up and spent $28,000 out-of-pocket to make a difference in his life.

If that type of motivation does not teach hundreds of teenagers to stay determined, what will?