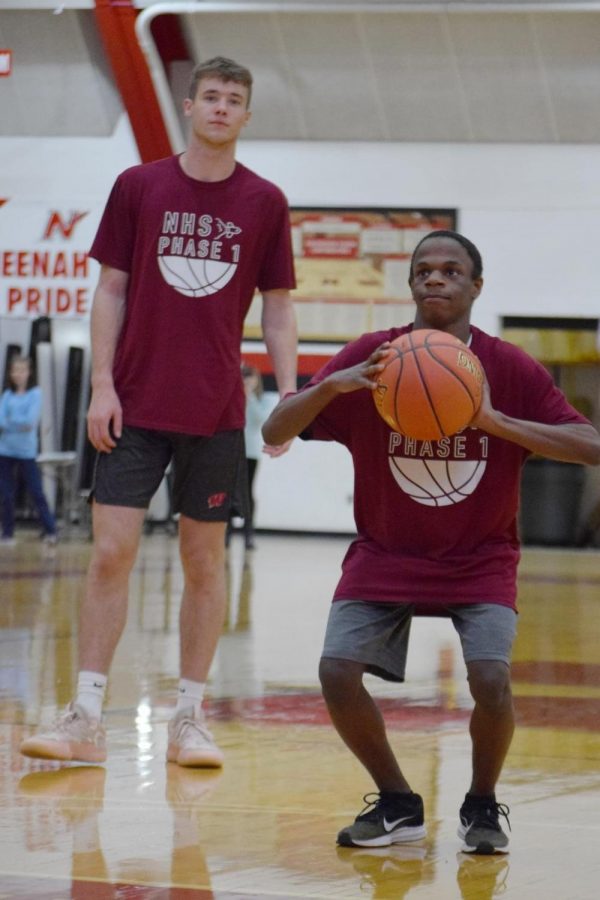 Edward Felton at the free-throw line.

The annual Phase 1 event ended with a 23-22 victory for Neenah’s Special Olympians over the NHS staff, with both players and attendees participating to make a unique experience.

“The Rocket Rowdies definitely did a good job of making the event special,” Gavin McClowry, a student at NHS and attendee of the event said.

Phase 1 was created in 2014 by a group of students, going through many different names such as Phase 2 and Phase to Black; however in 2018, the National Special Olympics Organization moved toward more unified teams of both Special Olympians and regular ED students. As this was after SALT took over managing the event, they chose to change the name to Phase 1, for one unified team and one unified school.

According to the official Special Olympics Website, by having students with and without intellectual disabilities play together, new relationships will be formed causing a more positive experience for all parties involved.

“I feel like a lot of times special ED students kind of exist in their own wing of the school and maybe you see them in the halls, but they’re not necessarily part of the student experience the way regular ED students are. This just kind of brings the whole school together in support of them,” Tracy McClowry, SALT Manager and Phase 1 Organizer said.

The National Anthem is followed by introductions for both teams. On the microphone is N.J.S.D Communications Manager Jim Strick. The staff is introduced first at half-court, where they each give funny handshakes and are showered with booes from the student section. Alternate Education teacher Brian Borchardt walks onto the court sporting a Troy Bolton jersey and Dr. Mike Altekruse wearing retro Indiana Hoosier striped pants with a rainbow headband.

Strick gets back on the mic, it is now time to introduce our student players. The Neenah Girls’ basketball team, who warmed up the special olympics team pregame, makes a tunnel for all the players. The SALT players are introduced first, who are then followed by the Special Olympics players. Each player has a giant smile on their face as they run through the tunnel and hear the boat-load of cheers from the crowd.

The first half was an absolute defensive battle. Turnovers due to brick walls that both teams built in the paint led to them. The score was 10-5 at the end of the half, with the scorers from the staff team being Dr. Altekruse and Coach Jung, and the scorers from the Phase 1 team being Alicia Langlois, Aidan Belot and Edward Felton. The fun does not stop at basketball though folks, it is time for a halftime show.

Members from the Neenah Girls’ Volleyball team walk onto the court along with Special Olympians from the Phase 1 team, and they join each other for a dance routine to Usher’s “DJ got us Falling in Love Again.” All the parents in the crowd take pictures and cheer on the entertaining performance.

Opening the second half, both teams decided they had seen enough of the stingy defense and it was time to put some points on the board. Senior and SALT member Carter Thomas kicked off the scoring with a powerful dunk after an inbounds pass from Junior and fellow SALT member Elliot Swanson. Swanson even had a chase-down block on Coach Jung that would have made Lebron James proud.

For most of the second half, the Phase 1 team really pulled away. With an incredible 8 point lead at one point in the game things looked great for the students, but the staff were not going down easy. Dr. Altekruse and Coach Jung carried the load for scoring, cutting the Phase 1 team’s lead down to just 1 point. After a clutch steal, the staff now had the ball down one with 15 seconds to play.

Staff coach Todd Jacobsen calls a timeout to draw up a play, while Phase 1 coach Chad Oeftger emphasizes tough defense in his huddle. The ball is inbounded to former Special Olympics player Chris Jones, who now plays for the staff team, and he gives it off to Dr. Altekruse. Altekruse drives to the lane and misses the layup, but a foul is called by both Neenah staff members and referees Chad Buboltz and Chas Pronchinske. Altekruse heads to the line to shoot two, and the crowd is not making it easy for him. In order to combat that, Altekruse pulls his headband down to blindfold himself like the ending to the movie Dodgeball.

This does not work out like the movie though, because Altekruse misses even the rim. Borchardt tells him to snap out of it and puts the headband back up, which fails to help much either, because Altekruse misses the second, and the Phase 1 team dribbles the clock out. Game over, Phase 1 wins 23-22. The student body storms the court in celebration, and every Special Olympian has a beaming smile on their face.

The date for the 2022 Phase 1 game is yet to be announced, but the events of this year prove it is not an event to miss.