One Act Play State Bound After One Year Away 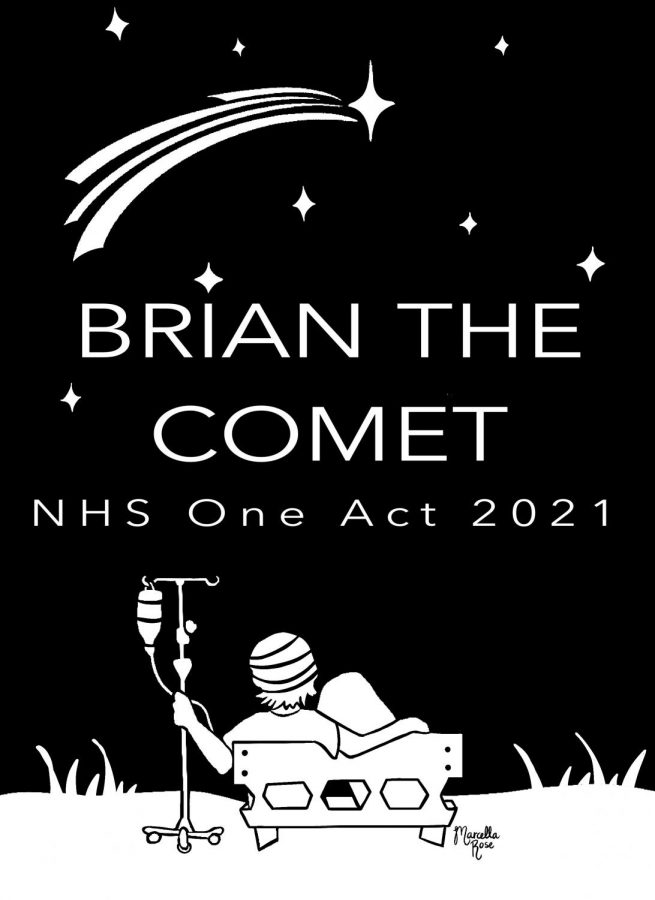 Artwork made for Brian the Comet by senior Marcella Schneider

Without being able to perform a One Act Play for a little under two years, the Advanced Theatre Studies students faced unusual and exciting changes as it progressed through District, Sectional and State competitions.

“I wanted something with a positive message to send. Because we’ve had quite a year, I read this show and I laughed and I cried and I just felt the message shine through so much. I saw it in my head when I read it,” Director and NHS teacher Kaitlyn Bergmann said.

Since 2019 the Advanced Theatre Studies class that is in control of the One Act Plays has had a hard time trying to get back to normal. Ironically the first struggle was not the COVID-19 pandemic, initially. Those who did enroll in the class were hoping that it would run as normal, but plans change. The students were upset that the class was not able to run so they came up with a plan with Ms. Bergmann to setting it up as an extracurricular. These students had to work on researching, writing and analyzing other plays and had to write up more papers in that class than they typically would. Finally to the 2021-’22 school year where the Advanced Theatre Studies class did not have enough students enrolling in the class to have it run as a class. So Bergmann who was the director of the class for the last three years for as long as she has been a teacher here at NHS had decided to turn the class into an extracurricular after school. With Ms. Bergmann being the director of the show she is able to pick the show, she decided to go with one called Brian the Comet.

Brian the Comet is about a teenage girl named Jude whose mother is far out in space and is not particularly close with her father. She soon learns her father has contracted lung cancer and she is forced to spend time at the hospital and meets a guy there named Brian. He is there because he has a brain that is susceptible to aneurysms. Jude and Brian become close friends while they are both stuck in the hospital and have nowhere else to go.

The main character of the show Jude (played by junior Sylvia Dums) has grown to feel as though Jude is a part of herself, “I really like how real I can get with my character. I get to put a lot of myself into my character and that’s good for me.”

One of the leads of the show Brian (played by senior Sean Price) said regarding their first performance, “We had a lot of prep time leading up to it. So I wasn’t as nervous as I feel like I would’ve been in a different scenario but with the amount of preparation that I had and the comfort that I had in my other cast members and the structure of the show.”

“I will say that I have a lot of background information because I knew about the show before anyone else did, and I was able to put in my input for the scenes that I wanted to put my input in for. While if you’re a cast member you show up. You read your lines. You do as your director tells. It was just a lot of fun creative freedom,” Cowen said.  She added that she found that being the student director helped to improve her skills.

Before reaching the State One Act competition, shows must compete and pass two other levels:  The District competition and the Sectionals competition.

At these competitions, shows are scored on multiple “targets” out of three (a system that will be familiar to NHS students). For Neenah, Districts have historically been hosted at Oshkosh West High School.

As Ms. Bergmann puts it, “In that round, the judges are just looking for ‘do you have a show that has development potential?”

Oshkosh West hosted the District competition that Neenah has attended for a number of years now. This year would have been no different, but because of COVID restrictions, many schools decided not to attend the competition and opted to send a recording of their show to be judged instead. This meant that in the end, only two schools were at the district competition, Neenah and Oshkosh.

Once a show advances past the District level they head to Sectionals, which is hosted here.

One of which was the host, Neenah. The big story of sectionals this year turned out to be said host school. Neenah put on an amazing performance at Sectionals and advanced to state with perfect scores.

The State One Act competition is hosted by the Wisconsin High School Forensics Association as part of the Wisconsin Interscholastic Theatre Festival, a festival that happens normally over the course of a weekend at one of a few Colleges in Wisconsin. The festival includes activities such as the Tech Olympics where students compete in a number of technical theater challenges to see who comes out on top (this has unfortunately been canceled because of COVID-19 restrictions). Or a showcase, normally done by the college hosting, in which students attending the competition can watch a semi-professional show done by college students (just like the tech Olympics this has been canceled). This year the festival is being hosted at the University of Wisconsin, Stevens Point. Additionally, an online option is available for schools that are unable to travel. It starts on Nov. 18 and ends on the 20. Unfortunately, outside visitors are not allowed. But students of UW-Stevens Point and those competing are allowed to watch the other shows.