Column: An Argument for Comic Books 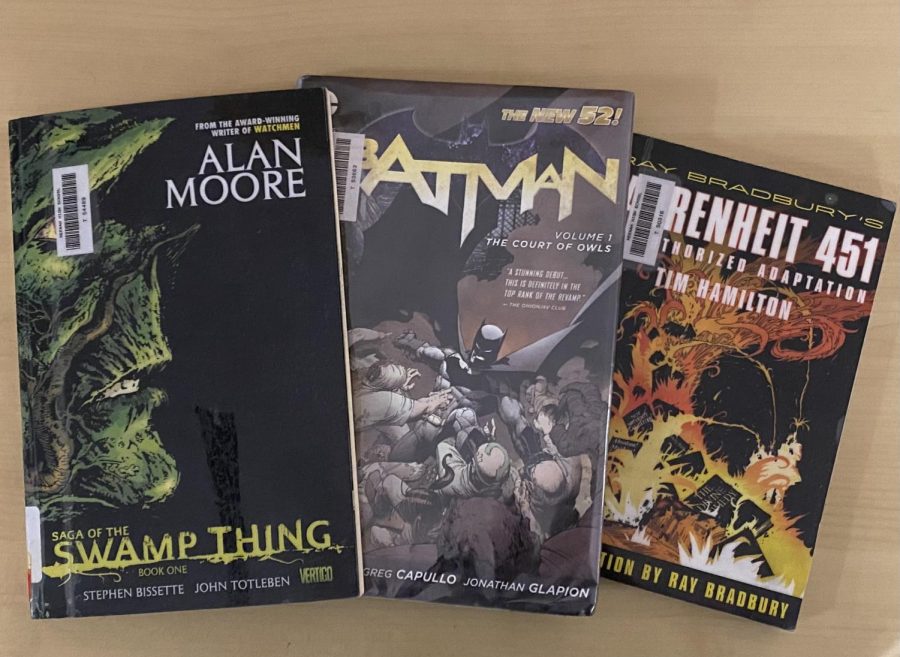 Three comics from the NHS library that I can recommend.

Comic books, graphic novels, cartoons and funny books go by many names, but hopefully by the end of this article readers will feel that “not ‘real’ books” is one of them.

According to a study conducted by the Pew Research Center, 23% of American adults say that they have read a book in the past year. With one quarter of the population giving up reading after their schooling, finding ways to make people fall in love with reading at the grade school level is an important part of keeping books alive. Part of that responsibility for teachers is understanding that not everybody responds to information in the same way, and some students are incapable of truly appreciating a story when it is just words on a page, and some have a preference for a visual aspect to storytelling.

I often think about why people refuse to see comics as reading. Why people have this urge to put them down, simply because they are more colorful than blurbs of text on white paper. One of my main thoughts on this subject is that people relate them to children’s books because that is the last time they read a book filled with images.

Comic books are not children’s books. They are quite the opposite.

Children’s books have images to help teach reading, where the image gives context clues and a visual interpretation of what the words are telling the reader to help get their mind in the right place to figure out the words. Comic books, on the other hand, have images to tell the story. On any comic page, readers can look at the images by themselves and know the story being told, and the words are only added to explain and move the stories in ways that images cannot by themselves.

With that distinction, the argument may become about how comics have fewer words than a prose novel, which makes it less reading. And that is completely true, by that definition of reading. But words are not the only things that can be read. In reading comics, even on silent (no word balloon/captions) panels, the reader is engaging with facial expressions, body language, and context clues to tell themselves a story through visuals, which makes reading comics a much more similar experience to existing in the real world than the all-text white and black of prose. There are comics that lack a single word, but tell intellectual stories nonetheless. The joy of comics is the juxtaposition of words and images, which can create an interesting twist when removing one of those two factors.

Now that I have made an argument for why comics are reading, let me make an argument that may not make any sense: it does not matter what one reads in a comic, the importance is all in what is missing. An idea first made mainstream by Scott McCloud in Understanding Comics: The Invisible Art (a college-level textbook on comics), sequential art stories are all about the white space between panels rather than the actual images themselves. When reading a comic, and one panel is of a gun being pointed at a woman and the next panel is that woman dead on the ground, bleeding, readers are not actually seeing that woman being shot. There is no panel of the bullet hitting her, but because of the context clues of the two situations the brain is piecing together what happened, which creates a new level of reading that the reader is responsible for.

I would like to finish on a note that relates to the first topic: comics being like children’s books. Something I did not touch on when disputing that idea is the idea that comics are “for” kids, that they are only capable of telling stories suitable for young ears. There are comics that explore “R Rating” topics like sex, drugs and death readers may be looking for, but there are also comics that simply explore the every day in mature and literary ways. But, comics can also be for kids. Comics are for everyone.

Maybe I have convinced readers of comics status as literature, maybe I have not. Either way, comics are about telling the story.  I urge my readers to not take my word for it; read some books. Comics are one of the most progressive and ahead-of-their-time mediums in social issues and storytelling alike, and they have been for the last century; keep an open mind and read great stories in a fascinating medium.

The comics community is welcoming and incredibly interconnected, and we are always hoping to get new people hooked on our favorite paper. Whether readers stick around forever or only read one, ask the local comic shop employee for a recommendation and watch them drop everything to find something they think a customer will love. Just head to Comic Shop Locator, type in your zip code, and find a story to read and fall in love with reading again.