Column: When Does Someone Become an Adult? 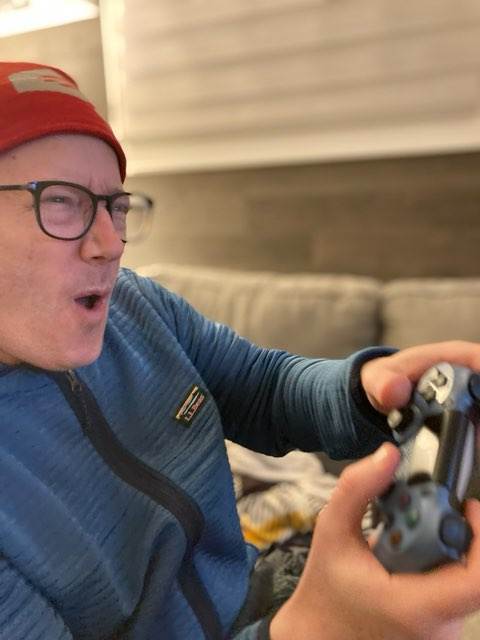 A middle-aged man takes part in an activity seen as "childish."

“Future” has always been my least favorite f-word, so the thought of growing up and living on my own has always frightened me. I turn 18-years-old in about a month’s time. Pretty soon I will be an “adult,” or at least the law says I will become an adult. Every milestone birthday I have experienced has felt anticlimactic; I felt exactly the same. Before turning 16 and after I turned 16, no change. I did not suddenly mature.

So, maybe I will not have to stop reading comic strips and wearing band t-shirts just because I checked 6,570 days off the calendar. That, however, begs the question: When does a person truly become a fully developed adult?

An American legally becomes an adult at 18 years old. This rite of passage provides a whole new world of responsibility such as being able to vote, getting married and buying spray paint. One, however, cannot buy alcohol or cigarettes until they are 21. Even then, a person can drink alcohol with their parents before they turn 21. On the flip side, at 16 years old someone can get a license to cruise in a death machine that weighs upwards of a ton at 90 mph.

Though legally a person is an adult at 18, this is not consistent throughout the rest of the law. We have also already established that simply turning a certain age does not make a person that much wiser or springboard them into adulthood. If the law cannot answer my question, clearly I must look elsewhere.

If science can give us steroids, why not see what science says about adulthood? According to the BBC in 2019, the brain becomes fully developed and “adult” as late as 30 years old. Perhaps this is why so many people in their early twenties have not grown past TikTok and overpriced coffee. The brain may be fully formed by 30, but that does not mean someone in their 30s and above is an adult by default. Older people can be fully physically developed, but still mentally underdeveloped.

Besides the laws of the government and science, I believe there are two other options in which one can reach adulthood. The first is life maturity. Life maturity is anything from being able to pay taxes or living alone. Basically, practical skills responsible adults are expected to perform; thus I reached out to my  teachers for pragmatic advice.

“When you have a problem and got to bail yourself out. You have to solve your own problems,”  Mrs. Diane Underhill, beloved math teacher and an adult of every caliber explains.

Certainly having the responsibility to course correct one’s life is a sign of approaching adulthood.  Going to work and earning a living rather than playing with Legos all day is a more practical decision that keeps a person’s life “on track” and something society would view as “adult.” Though life maturity is certainly a large factor of adulthood and maturity, it cannot be all there is. Everyone knows someone who has money or a house and still acts like a complete and utter child.

As a lowly 17 year old who is not yet an adult in any form, something I see in teenagers still developing is lying to themselves about their own emotions. From “It is not my fault” to  “I do not need help” and even “I do not care about anybody else,” emotional immaturity is a surefire way to find out if someone is an adult or not. A large step to becoming emotionally mature is learning life is not all about the individual (even if you are as ruggedly handsome as myself).

“I don’t think I truly felt like a full-fledged adult until I became responsible for someone else’s well-being,” Mr. Chris Skogen, father of three and husband of one with math teacher status, said. Skogen started to look at himself as a responsible adult when he chose to provide for a family. Someone can be legally an adult and have self-responsibility as an adult but not until a person learns to care for others can they be considered an adult in my eyes.

So when does a person become an adult? Every indication method mentioned seems like a viable option. A likely conclusion would be that what constitutes an adult is a combination of legal age, science, life maturity, and a heavy dose of emotional maturity. This answer seems broad and unrewarding, so I did a final bit of research. If anyone knows when adulthood begins, it would be the biology teachers of the high school science department, right? Well, it turns out their answer was as big of a copout as the 2006 Time Magazine Person of the Year.

“Never,” said biology teacher Mrs. Molly Brown. No matter how many of these characteristics a person has, adulthood is not something one can just fall into overtime or buying cigarettes. While all of these ideas have a stake in deciding if one is an adult or not, they may be better suited for indications of becoming more mature and well-rounded in the journey of life. The title of “adult” may not be as important as the characteristics associated with the name. Tonight, I can rest easy knowing that just because I will turn 18 does not mean I have to immediately swap my free room and board at my parent’s house for a 30-year mortgage plan. While becoming an adult is an adventure most of us will go through, the maturing that comes with the journey is much more important than the destination of being named an “adult.”