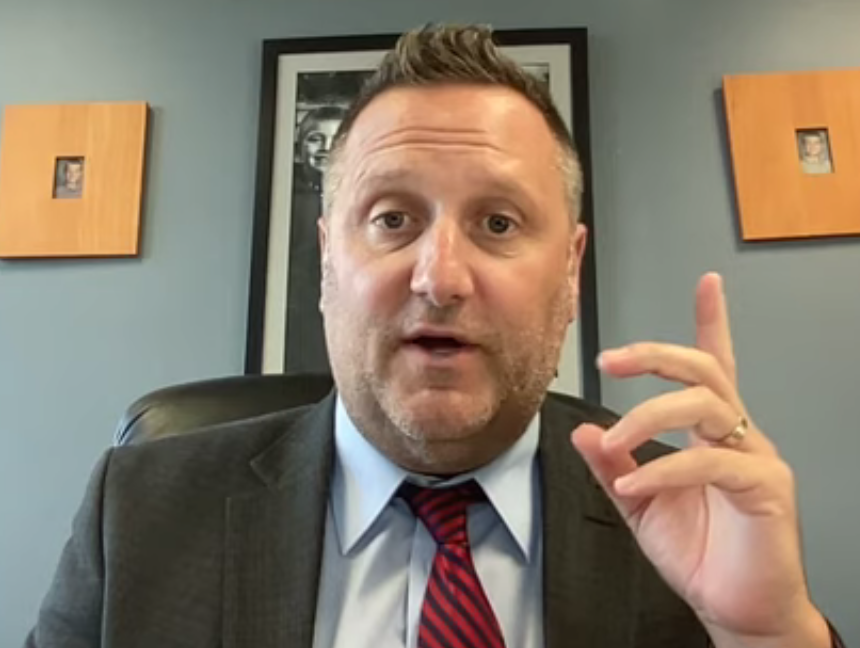 One of the numerous videos Principal Brian Wunderlich concludes with the phrase, "Rockets, be amazing."

“Rockets, be amazing,” Principal Brian Wunderlich delivers that lecture at the end of every video. If that statement needs to be said, is the high school not already amazing? Is there something that can be done to make it amazing? College has certainly figured some things out that high school has not, and, with my experience in some college classes at UWO, I would like to point out some things to make the home of the Rockets truly amazing. Every student undoubtedly has strong opinions on the subject, and this article will aim to expose some of these grumbles, and, if nothing else, give seniors a reason to look forward to leaving.

The first common issue is locked doors. Rather than entering through any main door, students are limited to two choices: the front door or coaxing a friend to commit a school-level felony by allowing entrance in through another door. For example, the poor souls who have a spot in the Memorial Park parking lot, after walking a half mile in subzero temperatures to get to the school then have to walk another half mile to the main entrance, when they could have just entered through the giant sets of doors almost mockingly shouting that they are door 1. In college, with the exception of fire exits, it is almost impossible to find a door locked; everyone knows where they are going, and, with many different buildings, it is almost impossible to police entrances anyway.

Another issue is class periods that have no flexibility. First, let me explain; in college, if students finish a quiz, or the instructor has not planned an excessively long lecture, students can just walk out, no strings attached. So rather than spending those last 15 minutes, snapping friends and explaining boredom, students can just go and not be bored. Crazy, right? This would be beneficial to teachers, too, since even the best teachers cannot alter the space-time continuum and make a 30 minute video last the entire hour-and-35-minute class. This would be a good idea; however, it is against the law since kids have to go to school. Unless the voting age is lowered to 14, and Congress is made up of high school students, it will be a long time until any change will happen in that respect.

An additional issue that just arose recently that is something nearly everyone in this school agrees upon: grading. A poll from former Satellite reporter Kiana Valeri at the start of the 2019-’20 school year (which was when the student body had experienced both systems) found that 83 percent of the 164 respondents disapproved of the targets-based grading system. Admittedly, the system was still in its early phase at that time, but for the most part, sentiment has not changed in recent years, and many upperclassmen who still remember the traditional system still dislike targets-based grading. The problem is that those who like the grading system just happen to be the people who make the decisions about them. There is no greater feeling than looking at the test one stressed about for weeks to see a traffic signal with no letters or numbers in sight. Students are mad, parents think kids are lying about the test because they do not know what percentage they got on the test, and students are not even sure what the requirements to get a good score are.

Senior Olly Dungan shared, “Our success is judged on a three-point scale of passing, failing, and ultra-failing, which is much less of a representation for student capability than the five letters we previously had. Also, it creates unweighted GPAs, which doesn’t help anyone who graduates from Neenah look like a student of academic prowess.”

High school supposedly is preparation for college, though it only makes it so high-achieving students cannot stand out on a college application. Also, college uses a percentage scale and most classes give points for homework (also unlike the targets-based grading system). To truly prepare for college, would it not make sense to grade the same way as college grades?

Finally, the bathrooms are a warzone. Literally. Not only do some stall doors look like they have been bombed, but all bathroom users get the joy of rationing; rationing in that there are no amenities such as toilet paper and soap to be found anywhere.

Dungan gave me her thoughts of traveling to this warzone, “Half the time in Conant, the hand dryers are inoperable, and the paper towel dispensers are vacant of any paper towels. I would really like to just be able to wash my hands. That’s like, what we’re supposed to be doing in a pandemic right?”

Apparently, even COVID is smart enough to avoid these restrooms. For those who are not, they venture out to this warzone just to find no brass band, no celebration, no reward, just some others hanging out in the bathrooms to skip class or do something they do not want the administration to see. Luckily, there is a solution to this problem being security cameras in the bathrooms. Unfortunately, there is a problem — it is a bathroom; there is no way that that is even remotely legal. So much for a solution.

This problem, however, like others, is not a high school problem, it is a maturity problem. To be cool does not mean being stupid in all situations. Actually, with one exception: the high school. PDA in the hallways, stolen door signs, and food spread across the cafeteria like confetti are just a few of the strange occurrences that happen in the phenomenon known as high school. Neuroscientist Sandra Aamodt says that by the end of high school, at 18, the brain is really only halfway developed; the prefrontal cortex is still developing. Turns out, that part of the brain is in charge of planning, being mature, and telling students not to pull the fire alarm as a joke.

Wanted: treatment of chronic stupidity by speeding up brain development.

Apparently, since no one has yet answered my request, making someone mature is impossible. Despite this, something as simple as encouraging a friend to pick up an unwanted banana can go a long way.

So, how do we combat these problems? How can high school be made amazing? One solution that comes to mind is making high school admissions as exclusive as college. Think about it, in exchange for less chaos at the high school, there is double the stress and plenty of uncertainty. What could go wrong? Another solution is making kids pay for high school. Not only would the school get more money to hire an army of janitors, but maybe kids would behave with a higher-stakes learning environment. Life would be simple and easy for those select few millionaires who could afford high school, and everyone else just would not learn. To be fair though, who honestly wants to live in 1846? According to the University of Wisconsin’s history department, that is the magical date students will have to time travel to in order to reach such a place. Since these are two unworkable solutions, the school district decided on the only workable third option, which was to ditch the system and build something brand new. Yes, it all makes sense; surely high school students would not dare trash a new building. All problems will magically disappear, and someone will earn the Nobel Peace Prize. If only world hunger were this simple.

For those who consider continuing on to college, do not worry, it will not be like high school. For those in high school, individuals have the power to make a change, especially with the student government taking a bigger role in school policy. With a full Senate and House of Representatives, maybe the government will take a larger role in solving these issues. That, or our student body will become excellent at arguing. Otherwise, without any action, I wish students good luck on surviving  four years at Neenah High School.