Mayoral Candidates Answer Questions from the League of Women Voters 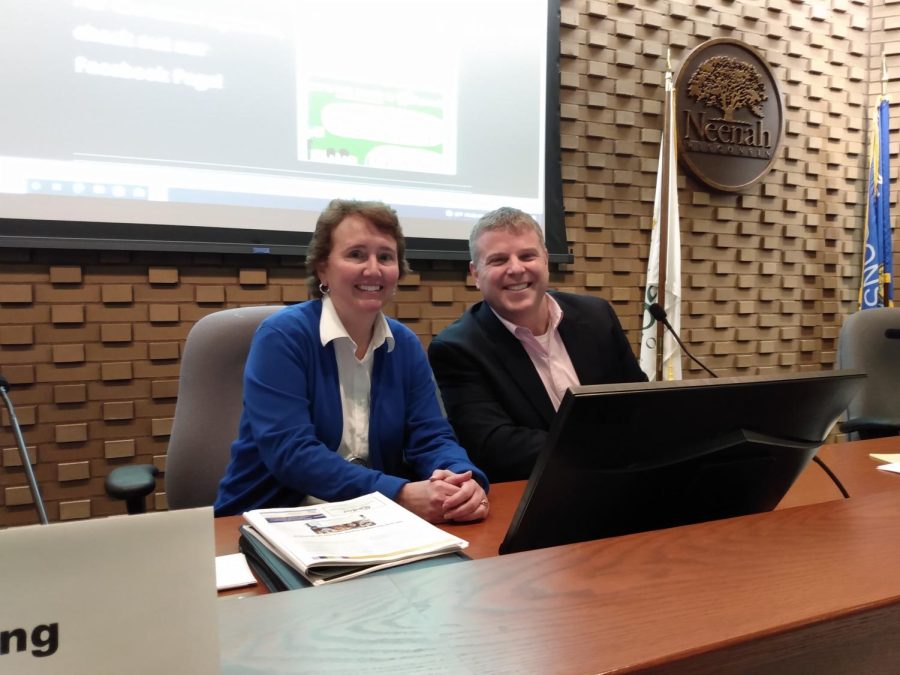 Both candidates, Jane Lang and Bryan Borchardt, smile for a photo shortly before the public forum on March 9, 2022.

Residents of the city of Neenah were given the opportunity to hear directly from Jane Lang and Brian Borchardt, two current city Aldermen who are both in the race to become the city’s next mayor.  In an open forum event organized by the Winnebago County branch of the League of Women Voters, constituents were invited into the Neenah City Council building and permitted to hear the two candidates speak on a series of issues relevant to the progress and future of the city of Neenah.  Being the first time such an event has been able to be held since 2019, the discussion brought in a healthy-sized crowd.

For a timespan of roughly one hour, both candidates took turns giving two-minute responses to questions that had been prepared by the League as well as suggested by the audience, which had come to watch.  Both candidates generally agreed on most issues presented during the forum, including on various topics that had recurring appearances throughout the event, such as accessibility of the city to alternative methods of transportation, as well as discussion of ways to create job growth and reverse the unsettling trends of local business closures that have affected cities all across the country in recent years.

Throughout the forum, both candidates frequently mentioned their connections between the management of many local organizations and cited their frequent chats with constituents on the issues that matter most to them.  They both stated they were willing to consider the input of all Neenah citizens in their policy-making, and that they would work to provide solutions that were both beneficial to the local population as well as the economy.  Personal Experience was made a central part of their rhetoric, with both candidates frequently mentioning their experiences having already worked with city government for several years.

“Our motto is to empower voters and defend democracy,” came the clear message from Posy Thurow, a co-moderator of the debate, speaking on behalf of the League.  “To that end, we want everyone who is eligible to vote to be registered, and to be an informed voter, and that’s what this is about.  We are nonpartisan, but we are political.”

At the entrance to the event, the League had been distributing paper clippings with information on how voters can get to the polls.  While the clippings directed voters toward myvote.wi.gov, a Wisconsin state government-owned website, for information regarding polling places and registration status, they also included the link to a website of their own, with more detailed information regarding the two candidates as well as a Q&A series.   This can be accessed at vote411.org.