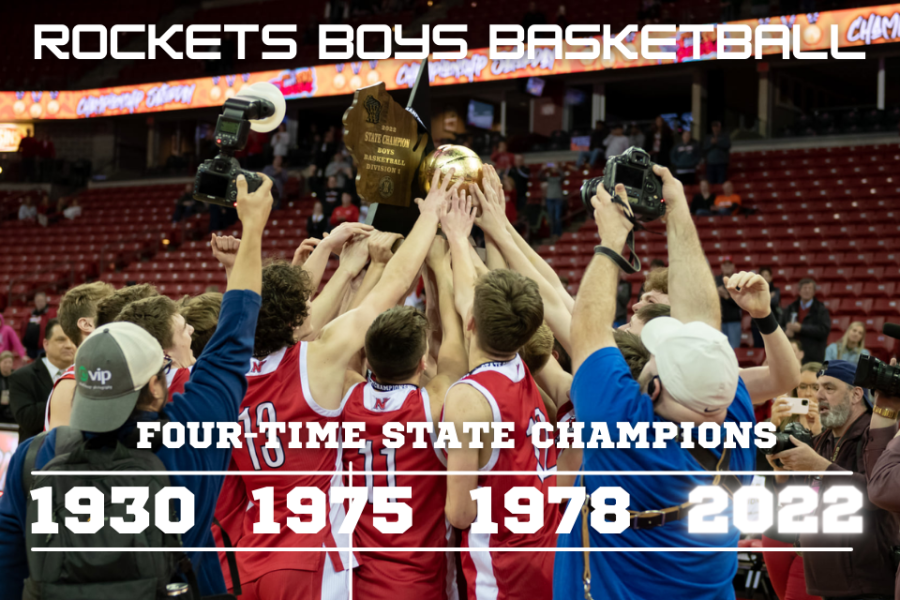 The game against Brookfield Central made the Neenah Rockets Boys' Basketball team bring home its first championship gold ball in 44 years and the 4th in the team's history.

The 2021-’22 Neenah Rockets Boys’ Basketball team concluded its 29-1 season Saturday at Madison’s Kohl Center with a decisive 64-52 victory against Brookfield Central, earning them the distinction of state champions for Division 1 of the WIAA.  Such a victory has been in the works for some time and felt certainly plausible after the Rockets’ strong performance in the 2018-’19 and 2019-’20 seasons, the latter of which saw its final tournaments canceled out of COVID-19 precautions, ending the Rockets’ climb with a win but no title.   This year, however, the Rockets are the proud owners of a golden ball trophy, something that the team has earned only four times in nearly a century of its existence.

“I’m just happy that I could go out on top with my friends,” #13, senior JJ Paider said.  While proud of the end result,  Paider acknowledged that the road was not always smooth.

According to Max Preps, the Neenah team has clocked in more victories than any other team in the state, and yet the record also includes one 64-68 loss against Appleton East, the third game of their season.  Paider explained that losing to Appleton East at the beginning of the year was a wake-up call. “After that, we flipped a switch and [that] made us realize how much we need each other if we wanted to fulfill expectations. After that game, there was no looking back.”

Player #20, Matt Jung, details the team’s growth as follows:  “We realized we never wanted to feel that feeling again and knew we had to work much harder in practice. After that game, the season was a grind, we had tough games every week and just had to take it one game at a time. We kept slowly moving up in the rankings until we were finally ranked the number one team in the state. And we knew we had to keep it that way.  We tried not to pay much attention to the rankings and just focus on ourselves and our main goal (winning state).”

Paider also talks about some of the other challenges the team faced.  He explains: “one of our best players, Cal [Klesmit], tore his ACL before the year, so that was obviously heartbreaking. But we also had 3 starters miss at least one game this year cause of injuries. So there were a lot of changes we had to make during the year.”

But eventually, the Rockets pulled together and won the championship, despite such difficulties. The secret, as Paider asserts, simply involved “Trusting our coaches. They put a lot of effort into game plans and practices. They knew what we could be all we had to do was trust them. [Coach Lee Rabas] always said that he hadn’t thought we played our best basketball. And even before the championship, he said that. So that definitely motivated us and we certainly played pretty close to our best basketball.”

Saturday’s game in Madison allowed the team to do what they are known best for, playing to victory in front of a roaring student section and thousands of spectators.  And even after the pomp and circumstances of award ceremonies and press conferences immediately after the game, Sunday saw hundreds of Neenah residents line up in a parade to welcome the team back home.  Videos of the team members sitting in the back of trucks riding past cheering spectators with police and fire escorts were shared on Facebook and Instagram.

Jung comments, “I think the coolest thing about the experience is the whole community coming together to support us on our long journey to become state champions.”

The biggest satisfaction, though, came for the seniors who played in the never-completed 2019-’20 season.  Player #21, senior Carter Thomas, mentions that his former colleagues from that year were “an amazing group that didn’t get the opportunity to accomplish what people thought they could. Those seniors did a great job of leading and getting us to where we are today. I’m thankful to have been a part of that team, carrying on the goals we had into this year and bringing a championship home.”

As one of the two current team captains, Thomas confesses: “It’s been an amazing opportunity to have that role with this group of guys. Everyone is able to bring something different to the table and that’s one of the biggest things that has made us so successful. As a team we had the same goal of finishing the job (especially our senior group) and putting this year on the field house banner. I’m so thankful for this team and being able to bring a gold ball back to Neenah.”

Though Neenah’s last state championship was in 1978, they also won at state in 1975, only three years prior.  It remains to be seen whether Coach Rabas can maintain the practice regimen and sheer momentum needed to take a hit at such a title sometime in the near future, but right now, the sky looks clear for Neenah to hoop through it.