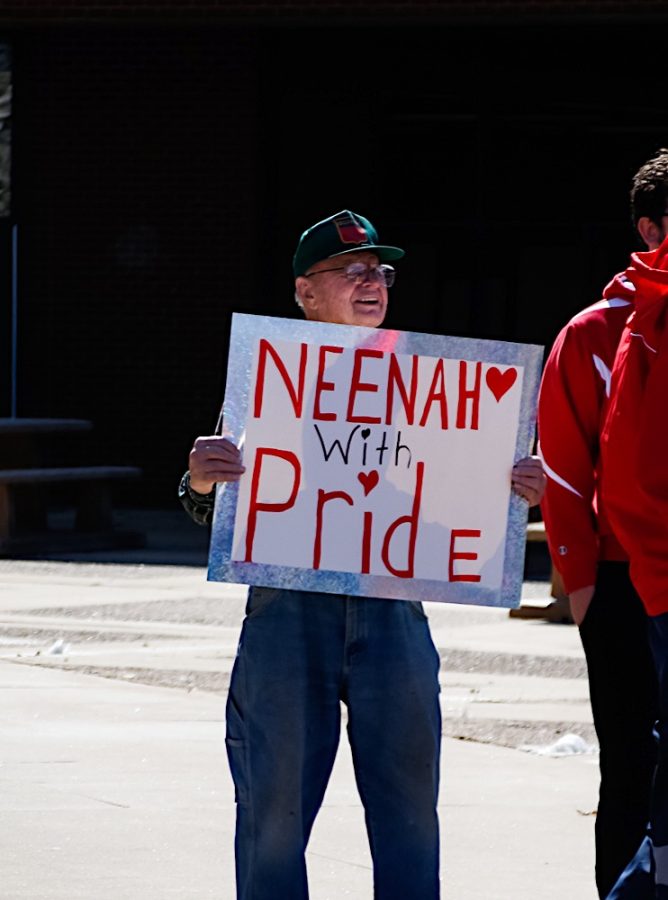 Author’s Note:  This story was the result of a social media post of Jim holding his sign at the parade that was viewed by Rocket Nation.  Jim’s photo exploded, and I was curious to know why.  I connected with Jim’s caretaker’s son.  The result of that exchange is the story below.

Going to state is an athlete’s dream. Winning state is the athlete’s goal; and one never knows who is inspired to come along for the ride. For most, attendance at a high school sporting event suits the occasion.  If one’s schedule allows, residents of Neenah included, fans attend.  Then there is Jim Sturgis.  Jim is a die hard fan that has gone to nearly all of the Neenah High School boys’ basketball games – especially this season.

As a former Neenah Rocket, Jim always enjoyed playing basketball; however, not being on the team,  left Jim and his friends to play in the park, or any open gym that would allow them to play. Following basketball throughout high school, Jim went to the 1978 state basketball games and watched the Rockets bring home the golden ball.

Through years of athletes moving on and off of the court, Jim could not shake the inspiration the Rockets basketball team had on him, and he continued to follow all of the games. Whether on the sidelines or not, he always knew what was going on and made it a mission to be at the most games he possibly could be.

Neenah’s sectional win against Eau Claire carried the team back on the road to Madison for the state semi-final and championship games. Poor weather that weekend did not hinder the fans from pouring in and supporting the Rockets, and it of course did not stop Jim from representing his favorite team and sport. Sitting in the bleachers, Jim saw the Rockets bring home the golden ball yet again.

Support from the community did not stop until the Rockets received a welcome home with a police and fire truck escorted parade back to the Ron Einerson Fieldhouse. For the record, Ron Einerson was the coach of the 1978 state champions.  Students and community members lined the sidewalks and parking lot to welcome home the fellow Rockets. Although he was not wearing red, Jim had the largest sign at the parade reading “Neenah With PRIDE.” He was there just like he always is.

Inspiration comes in many forms. Rockets inspire so many people and youth in the community through their never ending determination, skill and sportsmanship. The inspiration is what allows fans back from 1978 to still be fans for today, tomorrow, and many years to come. Because once a Rocket, always a Rocket. The dream does not change – get to state. The goal does not change – win state. It gets renewed.